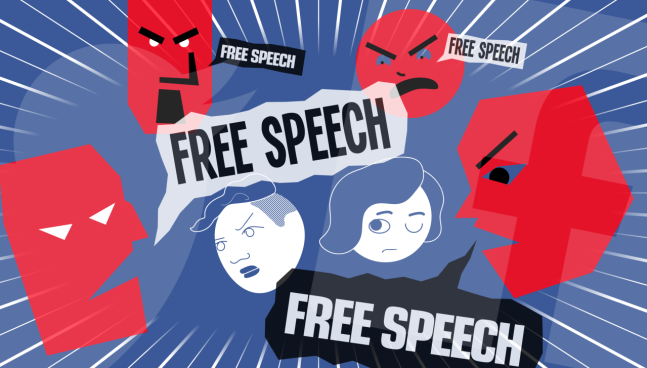 Most people say they believe in free speech but I wonder how many people really accept it when people say things they do not agree with. I believe absolutely in free responsible speech, this means speech that states any opinion, based on evidence or not, so long as it is not intended to directly actively insult or incite hatred towards an individual or group.

I am aware that there is a fine line between opinion and insult but I believe it is the difference between stating an opinion and stating an intention. This means I can state that I believe people with green hair offer no economic value to the stamp collection industry. but I can not state that if I ran the stamp collection industry I would ensure people with green hair were prohibited from collecting stamps. For the record, these statements are made up and are not my views!

I hope I am very self-reflective and that I try to understand the wider picture. While I currently see myself as a Tory, I am accepted until recently, all the political parties have slagged themselves off in equal measure and no one really had the moral high ground, but this has completely changed. The left, growing in strength and confidence, has claimed the moral high ground by an increasing level of abuse, threats and intimidation towards anyone who disagrees with them. I know from bitter experience how bad this has become.

Social media has currently taken on the role of a moral compass for a news media industry desperate to fill its web pages, where television and newspaper outputs are merged into a single infotainment industry. If social media and its reporting were balanced, where asking 100 people the same questions gave 100 different opinions, this would not be a problem, but this is not what is happening.

Social media in the UK is considered by the media as an anti-Tory campaigning machine. Of course, there are many people with many views who use social media. But if you imagine being in a pub in England where they are showing a football match of England vs Germany, any Germans in the pub will be keeping quiet to avoid themselves being abused by a now drunk and thuggish vocal majority!

If we want evidence that there is a bias on social media, we just have to look at the difference how Tony Young and Philip Hammond were treated talking about disability issues, and how John McDonnell is still celebrated for calling Esther McVey to be lynched. It is interesting the formal was responsible free speech when the latter certainly was not.

Twitter and Facebook both huff and puff about cracking down but I know from experience that they are more likely to block Toby Young than John McDonnell. One of my frustrations is that in terms of people with impairments is no one so far understands the bigotry we face is more likely to appear as a kindness rather than hatred. It is the people who think it is inhumane to ask someone as defective as myself to work who are the biggest bigots but trying to explain it makes me politically incorrect and so the baddy.

Social media is bias when it comes to free speech but it is a product of a wider sickness within society. I am not sure how we change things and I fear that society will not break away from its pathway towards victim rewarding until we face a period of severe hardship like a severe global recession or world war.